Magical creatures, cute aliens, tipsy pirates, futuristic robots… None of these is foreign for a game artist. This is fully valid for Imperia Online’s artists and it’s being proven over and over again through the diverse mobile games of the company. ‘I love every character I’ve created – each of them is special in its own way’, says 23-year-old Yoanna Viktorova – one of Imperia Online’s mobile games artists. Yo, as her colleagues call her, has already drawn for 5 of the company’s released games and is currently breathing life into the characters of two more games.

The process of turning a concept into a polished game is in no way a short one.

‘First comes the art style choosing – both the producer and I share refference images – photos and art pieces that inspire us and are relevant in some way to the game idea”, Yo says.

Once the art style is set, the experiments start. She sometimes creates several sketches for the team to choose from. With an audio book playing in the background the young artist then begins building up on the approved look of the character. Inspiration is not always drawn from the game idea only. Yo sometimes chooses several images of other artists she likes and takes the shading from one, the perspective – from another and so on. Then she mixes it with her own imagination until it seems good enough for her to present. If the result pleases the team, she moves on to creating the animation. In some cases the most effective way for this is by using frames from relevant videos. Other times her imagination deals just fine with the task.

When it’s all done and the programmers have turned it into an interactive experience, the pleasure is huge! ‘Seeing my creation in action and watching other people play and enjoy my drawings is simply awesome’, the artist explains.

For the animating Yo sometimes takes frames of relevant videos as a refference.

The result of the process shown above.

Despite graduating an Applied Arts high school with a ‘Textiles’ profile, she is more than happy she made it into the game industry. ‘The work is diverse, always new and interesting’, she says. Some of the artists she looks up to are Dave Rapoza, Patrick Brown, Brosa, Adam Hughes, Alex Garner, J.C. Leyendecker and Ruan Jia.

Right now she’s working on a creature, made of pure cuteness, and she already loves it as much as her completed creations! 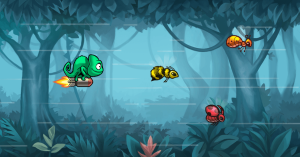 A screenshot from ‘Rocket Chameleon HD’ : one of the games Yo has worked on. 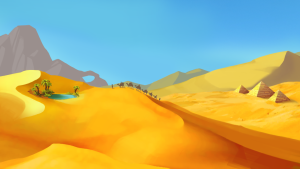 A background from Online Artillery 2. 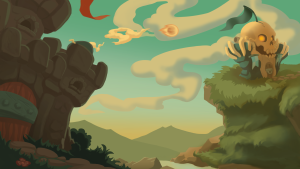 An art piece for Online Artillery 2.