Ivan and Gordana are married for 20 years now, but their bond grew even stronger in the last 8. In 2006 Ivan found Imperia Online and started playing it. His wife Gordana fell in love with the Medieval theme and quickly got hooked up as well.

Now they’re not just spouses and parents of a 15-year-old son and a 7-year-old daughter. Neither are they simply a lawyer and an economic expert.

Now they are leaders, conquerors, warriors.

The Medieval theme is what made Gordana fall in love with Imperia Online.

The couple is sharing an account, but their roles and duties are very distinct. Ivan is the conqueror – a brave warrior and a wise general dealing with all the military activities in the game, while Gordana has the economical development of their empire to take care of.

The two players from Prokuplje, Serbia, that go by the name killerubica in-game, admit they’ve had a few heated arguments due to one of them not doing their job with sending an army to attack at the right time.

Setting those moments aside, Imperia Online is a vital part of their overall happiness.

‘Most of our real-life friends are IO players by now – some of them we met in-game, others were ‘converted’ by us’, Gordana says. The only issues they have with their friends come from being late for appointed dinners. Ivan and his wife just can’t leave home before the army is prepared and mobilized.

Their duties don’t end there either – both of them are moderators on Imperia Online’s official Serbian forums where they’re known as GREAT MASTER. They found their love for the forums by accident – after talking to one of IO’s Community Managers – Martina – they started hanging out there and liked the idea that they can be useful to other players with the knowledge and skills they’ve acquired throughout the years playing the game.

Ivan and Gordana have an alliance in Imperia Online that consists of around 10 people they’ve known for years. The team stays pretty much the same and all of them play for fun and relaxation.

Despite being among the most experienced players, the spouses don’t take part in the competitive scene like the upcoming IO World Cup 2014 for example. However, they have several achievements in their history and are proud with the fact they’ve had the chance to enter the first ever open Version 6 realm.

They admit their true loyalty is to versions 4: ‘We loved version 4 of the game the most, probably because it was the ‘firstborn’ for us, and because in that version at the top of the rankings could only be players who really know how to play this very intelligent and complex game.’

‘We liked version 5 because of the wars’, the couple says. They then add that there are times of disapointment as well: ‘V6 has its advantages compared to v5, but there were some bugs and errors… which still occur, but we hope that everything will be fine in future.’

Ivan and Gordana have gotten the gold in Realm 50 while playing Version 5. 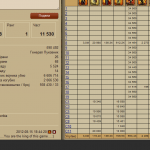 The couple keeps screenshots of their biggest in-game achievements.

Gordana says that no matter the rank of the players, when strong morals are present, everything goes well: ‘Over the years we’ve faced top players from different countries. We’ve established good behavioural patterns and a moral code inside our team prior to that, so that we can present our country in the best light possible. This is why we never experienced any inconvenience or bad attitude.’

One of the main principles Gordana shares is: “They don’t have to love us, but they have to respect us”. She and her husband believe that people that have embraced an unwritten code of honor in the game deserve respect from all players – both friends and opponents.

They consider themselves perfectionists which speaks a lot of the fact they’re satisfied with the quality of work done on the official IO Serbian forums where they’re moderators. Gordana admits she and Ivan are happy with the helpfulness and expertise their fellow forum members always come forth with and are proud that nothing is ever answered with a standart or templated message. ‘There is cooperation which always leads to a logical, specific and accurate explanation.’

And at the end of the day the core philosophy they have about the game is that ‘people are way more valuable than all the prizes, trophies and diamonds in and out of the game. That’s what keeps us inside Imperia Online’s world.’